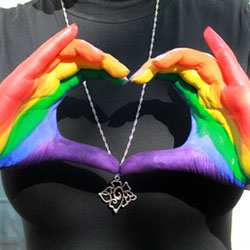 I never actually came out. The first time I told my mother I was gay, I didn’t think of it as some big reveal, I honestly thought I was just informing her of something. I have a cold; we’re out of milk; I’m in love with a girl. Though I was only fourteen, I can’t pin this grave underestimation on stupidity. I was a really smart kid and I had the grades to prove it, but despite knowing the official stance of my Catholic upbringing on gay people, I just never felt like the monster they portrayed.

Her name was Ashleigh. That’s not a pseudonym either, I can’t tell this story without her. She had this habit of pulling the edges of her sleeves to the tips of her fingers and the first time I told her I loved her, it was raining.  The second person I told was my brother. I say told, what I mean is: I buried my face in the sofa and screamed like a banshee because my heart hurt whenever she was late for school. She was late for school a lot. We fought a lot more. I don’t know if we were really at each other’s throats or if we just made up things to pass the time. We worked best when we were quiet; sometimes, when she had her back to me, she’d lift up her elbows to make space, and that always meant that she wanted me to wrap my arms around her and close the gap between us. To this day, one of my biggest regrets was the day I didn’t. I never told Ashleigh I was gay.

My first girlfriend didn’t think she was beautiful. I told a good friend that she’d been to my house and when that friend retched, I didn’t feel beautiful either. A month later we were at a birthday party and everyone was chanting “Kiss! Kiss! Kiss!” and I literally couldn’t breathe. I owe my first girlfriend more apologies than I do any other person I have ever known, because I took parts of her, and used them build myself. We started talking again recently and she keeps telling me to stop apologizing but she doesn’t seem to understand that she dated me for two months and I broke up with her once a week. I haven’t gotten the nerve to ask her if she knows she’s beautiful yet, but I pray, to no one in particular, that her new girlfriend tells her every day.

Leanne is yet another lesbian writer, who just touched down on adulthood. She lives in London and breaks up sessions of writer's block with drawing and Doctor Who.