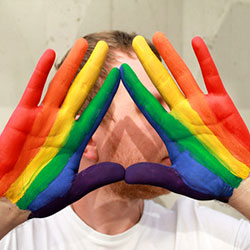 The LGBT community in the U.S. had a banner year in 2015, but many advocacy groups are recognizing that winning the legal battle for marriage equality is far from the last obstacle towards equal rights. Shortly after the Supreme Court ruled that same-­sex is a constitutionally protected right, several actions by the federal government placed LGBT discrimination in the
workplace on the fast track. In a ruling that came shortly after the historic marriage equality case, the Equal Employment Opportunity Commission (EEOC) interpreted Title VII of the Civil

Rights Act as also applying to protect LGBT employees. The issue that remains is that the verbiage of the law does not implicitly state that employees are protected no matter their sexual orientation or gender identification. The role of the EEOC is to enforce the law when cases are presented to them, but by the time that happens an LGBT employee is still exposed to the possibility of being retaliated against. We can lose our jobs, be overlooked for a promotion, and that, in turn, can affect our personal lives and livelihood for our families. The EEOC has ruled in favor of several plaintiffs who were fired solely due to their identification as Transgender and their subsequent transitioning. Their former employers were mandated to pay settlements, and while this is a great step towards securing equality, it doesn’t protect employees from being mistreated in the first place.

President Barack Obama and several members of Congress have taken their own actions towards securing workplace equality: issuing an executive order to prohibit federal contractors from discriminating based on orientation and identification, and introducing the Equality Act, respectively. The Equality Act would establish specific protections for LGBT individuals throughout the country on a number of basic necessities such as employment, services, and housing. The bill has bipartisan support but some political figures, presidential ­hopeful Jeb Bush, for example, want to leave it up to the states to decide.

According to the Human Rights Campaign, 31 states have still not passed laws that fully protect LGBT individuals. My home state of Illinois is one of the very few states that offers protection against discrimination in the workplace based on both sexual orientation and gender identification. That fact didn’t stop me from feeling nervous about my job security when I was outed at work by a manager.

It was the holiday season and I was working in retail at the time. We all wore headsets to stay informed and in communication with each other while we handled a much larger volume of customers than usual. On this particular day the headset was more of a tool for disaster than help. I was ringing up transactions with seemingly never ending line that wrapped around the corner of the registers and zig zagged halfway across the sales floor. A message went out to the entire team: “Bryana, why don’t you go help Rosie at the register? I know she’ll like that.”  The sentence seems innocent enough, but the intention behind it and the deep shade of red that spread across my face were clear indications that it was not a simple statement. I was not out at work at the time. I was barely out with family and friends. My crush on Bryana was the worst kept secret in the whole store but it was my decision whether or not to divulge details about my personal life, especially when it could make the work environment uncomfortable for me. I knew that there were certain older employees who were very conservative and old­ fashioned. I was worried about how they would treat me. I didn’t know how the general manager of the store would react to the information either. Suddenly everyone was interested in and talking about my personal life.

In addition to the embarrassment of having a crush exposed to my peers at work, the worst case scenarios ran through my head. I could have ended up like James Pittman of Pittman v Cook Paper Recycling in Missouri who was harassed at work for being gay, then fired. Or it could have gone like Tom Klansnic’s situation in Oregon. He was a vice­ principal of an elementary school until the district decided not to renew his contract after finding out he was gay. Two teachers at a Catholic high school in Minnesota were also forced out of their positions when they were outed (one anonymously and the other voluntarily). The list of examples is very long and incredibly disheartening. I was extraordinarily lucky that the majority of my coworkers were accepting and open. I was never harassed or maligned, or at least not directly, and my job was thankfully not in danger. The fact is that nobody should ever fear for their job security for a reason not directly related to business.

As election year quickly approaches the issue of equality in the workplace will be a hot topic to watch for. LGBT discrimination is at the forefront of issues that organizations like the Human Rights Campaign, GLAAD, and the National LGBTQ Task Force are fighting to end. Complications such as religious freedom and several members of a certain political party have arisen along the path to equality. LGBT people have their own day­-to-­day stuff to worry about, like navigating a work crush and relationship, for example. Worrying about retaliation for your sexual orientation or gender identification, whether it be at work or in any part of everyday life, is completely unacceptable and hopefully everyone will be agreement soon.