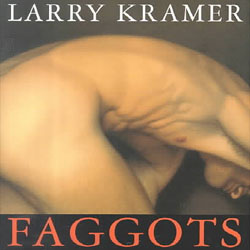 In 1978, Larry Kramer published ‘Faggots,’ which was to become a seminal work in the canon of gay literature. It portrayed gay society (most specifically, its sexual side) in a post-Stonewall, pre-HIV/AIDS New York, sparing no detail: the pages overflow with drugs, condomless copulation and fornication of every style, direction, and orifice, and utter diversions from the standard American conceptions of lovemaking, love, and sexuality.

Nearly forty years later, time has not been kind to the novel. It reads thin, shallow, and vindictive. The characters are flat, the plot past threadbare, and one finishes the book scratching their head, wondering for what purpose 384 pages were needed to say what the book wished to say. But, a literary analysis of the novel is not necessary; it is chaotic, directionless, and unorganized, and all pretense of plot and meaning were merely stapled hastily onto a text written for other reasons.

And certainly, the novel was written with a goal in mind, albeit one that seems to have been lost on the majority of contemporary critics who commented on it. The strongest commonalities between them (them being a collection of reviews printed in a 1979 edition), are praise for Kramer’s honesty and forthrightness, and expressions of disgust for outrageous content. On all the reviewers seems to be lost the heart of the novel, and the heart of its maker.

Namely: the author wished to express his outrage and reproval. For Kramer, the gay sub-society he portrayed, however, in all its frivolity and excess, cannot have been outrageous or reprehensible, as he was from personal experience well familiar with it. Thus he cannot have written the novel out the surprise of discovering the behaviors depicted in it. And an earnest and good-intentioned effort to inform the good, straight people of America about the wicked, deviant homosexual underbelly of their nation cannot have been his aim; if so, why would he have written so satirically, so scathingly, so critically, so acrimoniously, when the object was to educate a third party?

For the writing is by all means so: the characters, including Fred, the obviously autobiographical protagonist, are depicted nearly universally with an absence of depth, range, and multifaceted personality. They are vapid, one-sided, and singularly obsessed with their hormonal impulses. At times they gush romantic about notions of love and commitment, but these moments only serve as a critical foil to highlight further their moral hollowness and lack of self-control. They live in a two-dimensional world of total hedonism, one seemingly devoid of sympathy and caring, even between friends.

And so Kramer succeeds in shocking and nauseating his audience. How could he not? This novel was, for millions across America unfamiliar with or uneducated about gay people and gay culture, an introduction to something truly appalling. And while some of the more ‘eccentric’ activities depicted were and remain foreign to many people, Kramer’s novel portrays something far more awful: a community lacking affection, kindness, solidarity, and love. That is what must have appalled the average reader, confirmed Anita Bryant so strongly, and left heartbroken thousands of knowing individuals who read the novel and wept at the absence of genuineness.

In this way, ‘Faggots’ isn’t honest. Even Kramer isn’t – he hides behind a pretense of satiric revelation and moral criticism, when in reality he was merely angry at the other gay men around him for not utilizing the expanding freedoms of the 70s for activism and aggrandizement. And that was his real aim: to vent, to criticize, and to scold. The fact that yes, a gay man, too, can be unfair and harsh to other gay men, was lost on the majority. Merely as a homosexual, Kramer is not necessarily a bearer of truth and wisdom about such a far-reaching and complex phenomenon as the gay community, but his status as an open one publishing a novel confirming a populace’s darkest and dirtiest nightmares lent him, in their eyes, exactly that credibility.

Library Journal compares the novel to ‘Uncle Tom’s Cabin’. They do so aptly. Like Stowe’s cast of stereotypes and unrealistic, non-human parables, Kramer fills his novel with static and one-sided caricatures. The novel ignores the incredible depth and vast scale of gay life and community in his era: where is Marsha Johnson? Where is Harry Hay? Where are Hibiscus and Martha Shelley and Andy Warhol and Gore Vidal and John Waters? Their absence from the novel results in their absence in from the discourse. Its consequences also include the responses and opinions it provoked:

“…homosexual men whose worst oppression is their lack of courage to change the way they live…” – Library Journal
“A satire written, like all good ones, from the inside.” – Commentary
“An X-rated novel about the inner reality of homosexual life.” – Times-News (Erie, PA)
“From reading this, one wonders at the appellation the ‘Gay World.’” – Free Lance-Star (Fredericksburg, VA)
“Reads like the quintessential homosexual ‘how-to’ manual…” – Publishers Weekly
“An outrageous look at the intricacies of gay life…”  – Los Angeles Times
“Faggots is a novel of courage…a journey worth the chronicle…a noble gesture.” – Baltimore Sun

And so: stereotypes are confirmed, diversity is expunged from public consciousness, myths are created and implanted, prejudices are hardened into unbreakable iron, and wedges are hammered deeper. Concretely? Let us, for one, think of GRID and the Reagan administration’s childish and catastrophic (utter-lack-of-a) response to the HIV/AIDS crisis for years and years.

Unlike ‘Uncle Tom’s Cabin,’ however, and the anti-slavery sentiments which can be attributed to it, ‘Faggots’ has little to redeem it. The struggle past the walls of violence and across the gulfs of marginalization (struggles which by no means have been completed) begins, and began, with the step out of the closet. There are, however, many closets. There is the closet of isolation and deception which one puts between themselves and the world around them. There is the closet within one’s own mind, a web of lies and insecurities and fear. And there is the closet in the minds of others: a toxic bundle of stereotypes and conceptions and assumptions imposed upon everyone.

‘Faggots’ encouraged an exit from none of these closets. It did the exact opposite.

Does that mean the book should be forgotten? Does that mean it should be disregarded, that the world and behavior it depicted should be ignored? Of course not. They have their place in gay history, in American history, and their place today, in an era in which HIV/AIDS remains an unbanished crisis. But it is a role amongst many. And, like the discrimination and violence and hate of the past, the partiality of ‘Faggots’ has only one place today: as a lesson and a reminder.

So many of us have left the closets since 1978. And it is only with an unbridled, complete, and utter honesty absent from ‘Faggots’ that the steps out of them can continue.