Today I left work after 2 hours of being there because I was sobbing uncontrollably and could not handle my own grief. I have not been able to make it through a single day without crying exactly like this. Yesterday it was on the steps of Los Angeles City Hall as Lady Gaga read off some of the names of the victims of the Orlando shooting, today it was in the middle of replying to emails. I tried to take a nap today, my body exhausted from the aforementioned 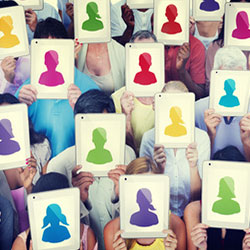 mourning and I thought a respite of rest would calm the storm. In my dream I was in an office, a normal day, but then there was an alarm, the sound of gunshots and screaming, only to quickly be revealed as “just a joke” by the people around me. I wondered if this was my own body telling me that the nightmare of normalized homophobia is all too real or if I had just been consuming too much media in the past 72 hours. In either case, when I woke up, I cried again. There are not many ways to accurately put a name to the unrelenting feeling that I am harboring – that it is not safe to be LGBTQIA+ in America today, that it has never been safe to be a queer person of color, that I am always at risk in this body, in this broken heart, in a gay club, in the streets, and even now – as melodramatic as it may seem – in my own dreams.

Let’s talk about every time you have uttered a slur, used queerphobic language, glared at and ridiculed someone whose identity “confused” or “upset” you so much that you reached for the tools of mockery, disgust, and malice instead of ordinary compassion. Let’s talk about how it took mass murder for you to acknowledge the humanity of queer people, and that homophobia is alive and well in this country, that it has always been homegrown and able to flourish in this country, regardless of how “progressive” or “liberal” the city. Lets talk about how Jeramey Kraatz perfectly put it, “if you can’t wrap your head around a bar or club being a sanctuary, you’ve probably never been afraid to hold someone’s hand in public.” Let’s talk about how people come to our gay bars and clubs, drink, party and revel in our pride parades and relish when queerness is fun, but are nowhere to be seen when we are murdered in cold blood. Let’s talk about every single time you’ve let a best friend, sister, brother, mother, father, cousin, co-worker, acquaintance, love interest, professor, boss, or stranger say something malicious, offensive, or hurtful about a queer person.

Let’s talk about your silence.

Let’s talk about what that silence does to people who identify as LGBTQIA+, as the thing you willfully do not defend but gladly change your profile picture for. Let’s talk about how while this might have been an attack on “humanity,” it was an attack on queer people who possess that humanity first. As the beautiful Tyler Ford put it best, “if you are only able to humanize people by erasing the marginalized identities they were attacked for embodying, you’re part of the problem.” Once you want to talk about those things, then maybe I will feel safer in your “thoughts and prayers,” maybe I will feel that “love is love,” or be able to sleep peacefully, maybe I will remember exuberant and unbridled joy is a feeling I am capable of possessing, not a fleeting memory of a former self.

I am not done talking about the #PulseShooting because I am not done being queer. I am not done being mindful of holding a girl’s hand in public when I am walking down the streets out of the fear – a fear so engrained and routine in my body’s ritualized function that I hardly notice it anymore – that I could be harassed, assaulted or far worse. I am not done crying, screaming, and mourning the loss of these 49 luminous souls and the 53 injured because their loss is still a black hole in our queer constellations, just as their families and loved ones cannot stitch back together the holes they have now left in their lives. “Apathy produces a climate in which queers are killed.” When you avoid confronting discussion about queerphobia and transphobia, your silence speaks volumes and is, in itself, an action and a choice too.

I cannot pretend that I am not having a hard time this week. Too often, social media posts feel like a race to the seventh stage of grief, accepting what’s happened as done and packaging the trauma in a digestible and understandable wrapping paper for all to marvel at. But I am not over what has happened, and I am having a really hard time. So many friends and family members have told me how grateful they are that I have a strong voice and am vocalizing this pain, but each time I open my mouth, a ghost speaks for me. I have tried to allow love, warmth, softness, and the strength of my own vulnerability dominate my internal conversations, but I am feeling so quiet inside. The pain and trauma that I share with fellow queer people has not subsided, it has only dove deeper into the recesses of my mind because I am thinking about every act of violence – physical, verbal, psychological and otherwise – that queer people have experienced long before Orlando, and who are bound to experience long after as well.

As I sit in my bed and write this, I think about what it means to be proud. How so much of Pride month is about carving out a space where we can exist freely, complicatedly, beautifully, and unabashedly. I think about how before we are proud, we are unsafe, we are self-doubting, we are heartbroken, we are lost and seeking community. How we seek communion in gay clubs, in the arms of our lovers, friends and family members, how we fight just to remember our own heartbeat, how we give birth to a culture forged out of love, loss and resistance, how we are still so far from home. I have nothing left to say to my queer family and community except I love you, I love you, I love you. I am still here. We are still here