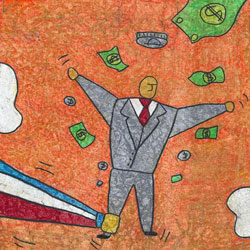 Recently, art installations bearing the name “The Emperor Has No Balls” appeared overnight in various American cities. They depict Donald Trump, the Republican presidential nominee, nude. The body is overweight and unsightly. The buttocks are flat, pink, and sad, and it has a micropenis. It has no testicles.

This is the statement: that Donald Trump is ugly and we should make fun of him for his ugliness, the size of his genital organs, and his weight.

As 2017 begins and Hilary Clinton is preparing for her presidency (he writes, shaking), we will look back on the 2016 Trump candidacy for President of the United States and will have lots to think about. Trump himself is unimportant. His body is even less important. He just wants attention; let’s ignore him. Other things deserve our focus much more.

And: this election has been underpinned by lies, untruths, and dishonesty. It is unimportant that Trump is a liar; he is a human, and humans lie. What is concerning is that flagrant duplicity is politically viable in America. What is distressing is that widespread rage has rendered many susceptible to demagoguery and charlatanry, and that even the Internet’s boon of fact checking fails to counteract this. Trump’s candidacy is not the first (or the only current one) to show us this, but it has driven the point home viscerally. And its conclusion will not bring an end to it.

And: perhaps most importantly, the presidency is not the end-all of American politics and government. Lobbying, think tanks, congressional stymieing and corruption, Wall Street, and the military industrial complex are not to be easily changed, by the president or by anyone. This has been so for many years, and its consequences for America and the world are of grave importance. Trump’s candidacy and the current presidential race debacle have caused some to forget this once again, temporarily. But its conclusion will not bring an end to it.

So, there are many things more important than Trump as an individual. Amidst all this, what does Trump’s physical body matter? What do the size of penis, the curvature of his buttocks, the extra pounds on his belly matter? Nothing. They are irrelevant. We have more important things to worry about.

And I, for one, find each and every human body beautiful.

The Emperor Has No Balls statues fascinate me. I gaze at photos of them and am transfixed. I am, after all, a human, and other humans and their bodies fascinate me, especially those which are strange, different from me, or usually off-limits. But I don’t want to see these statues. They are mean, inane, and childish.

What these installations highlight – Trump’s asinine comments about his genital endowment, his arrogance and pompousness – is unimportant. They are reductive. They shrink the focus from the critical consequences and background of this election to just what Trump enjoys: attention and stimulation for his ego, his persona, and, yes, his dick. These things are extraneous. We have more pressing matters to attend to. Why not make a statue with a speech bubble filled with any of his brazen comments, and give permanence to his words of misogyny and ignorance? Why not attempt to distribute information about the bald-faced lies and nonsense upon which Trump’s campaign rests?

The statues don’t do this. Instead, they play into his game, and reduce the election to a contest of appearance, ego, inflammatory behavior, and nonsense.

The artists behind the statues christened it in reference to The Emperor’s New Clothes. It seems they failed to understand the moral behind the story. Yes, the emperor is a laughingstock, comical, and pathetic. But more important are the townspeople unable to speak up for fear. They exist in a world of untruths, cognitive dissonance, and absurdities. Our world.

Perhaps the artists fancy themselves the boy who speaks up. So what? The story is cute and succinct, but reality is messy and its story always continues. In the real world, the boy’s speaking up changes nothing of the emperor’s arrogance and idiocy. He is silenced and his family probably punished, perhaps killed. And, most importantly, the emperor remains in power.

We all spoke up a long time ago; we already had our laugh at the ridiculousness of it all. Now is no longer that time. Now is the time to engage ourselves in the political, social, and cultural future of this nation from a place of earnestness, seriousness, and truth. It is not and never the time for body-shaming.

Away with the statues. I don’t care about the emperor.