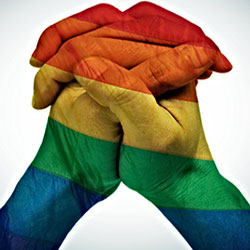 In the past, The Church of Jesus Christ of Latter-day Saints has made a name for itself as possessing a notable anti-homosexual agenda. It has taught that homosexuality is curable, played a decisive role in the spearheading, funding, and passing of California’s Proposition 8, and in order for them to be accepted as members requires of LGBT individuals complete abstinence from any homosexual relations.

One adherent, however, has gone against the church’s official stance on homosexuality: John Dehlin. Dehlin is a blogger and web activist, psychologist, consultant, and grad student who has made a name for himself as a prominent advocate for LGBT rights within the Mormom community. Dehlin himself is not homosexual.

A main area of Dehlin’s focus as a psychologist and counselor is mental health. He has worked to promote a healthy balance within the scope of religious and mental health, identity, and self-acceptance.

As a result of these pro-LGBT activities, along with additional questioning of some of the LDS Church’s policies and practices, Dehlin has now drawn the ire of church officials and faces possible excommunication. This comes after Dehlin had been warned in June that he was to resign, cease his activities, or face further discipline.

At Gaysforjesus we want to support everyone, including those whose beliefs do not match our own. We love and accept the LDS Church exactly as they are. In this case, however, we stand behind John Dehlin, a man whose promotion of mental health, positive identity, self-acceptance, inclusion, rationality, and non-judgment find admirable and wonderful. His remarkable work and capacity for love and kindness we support fully.