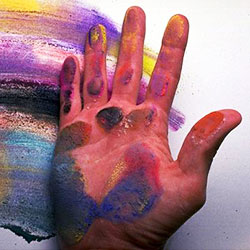 I began attending college. It was a new world for me. I moved to a city. It had sidewalks, and stoplights, and restaurants, and bars. There were also high school friends in very close proximity. I had an abundance of new found freedoms, but I still felt trapped. In 1994, we hadn’t started using the internet. I didn’t know how to find other gay men. I had waited for so long to live my life, but now I didn’t know how. Desperate for friends, I needed to rely on the familiar faces of my past. My friends from high school became my early friends from college.

I became depressed that I may never escape my life in the closet. I discovered an on-campus psychiatric counseling center, and scheduled a session. During my session, I spent fifty minutes dancing around the issue. In the last five minutes of my session I said something out loud that I had never spoken to another human being, “I’m gay.” I know it sounds cliché, but it felt like a huge weight had been lifted off of me. I knew I was gay, but to be able to announce it to another person was a huge step in the right direction.

Over the next couple of years, I came out to my two best friends. As my confidence grew, I made it out to a gay bar. I met a fantastic guy who liked me, and developed my first true-love. I began to make a few gay friends, and soon enough my life as a gay man was slowly evolving. For me, the coming-out process was gradual. I never made a huge declaration to the world. Instead, it happened person-by-person over the course of many, many years. I managed to live a double-life: my gay life and my family life. There was no doubt which one I preferred.

When it comes to relationships and dating, knowledge and experience go a long way. For many, these lessons are learned in high school. As a newly comfortable twenty-something gay man, I was far behind the learning curve. I felt like a 15-year old living in a much older body. Like a kid in a brand new school, I was scared to approach others. I desperately wanted to fit-in, but I was also terrified of rejection. As I began to network with other gays, I felt a compulsion to lie about my upbringing. I mean, who would want to date a poor kid with a seriously screwed up childhood?

The ruse began, and I became a master of lies. My father owned a furniture store. My mother was an accountant. We lived in a two-story brick house in the center of our town. Both of my parents were college-educated. Some of my stories from the past were true, but I often embellished them with phrases like “ran upstairs” or “at our beach cottage”. I felt like these twists further substantiated my lies. Over the course of a couple of decades, I began to believe them myself.

Eventually I graduated from college. I relied heavily on student loans and scholarships. It was a point of pride for my family. My dad and oldest brother were actually high school dropouts. My mother and four other siblings weren’t educated beyond high school. At my college graduation, I carefully maneuvered keeping my family and friends away from one another. It was not an easy task. My family was aware of these happenings, and amongst them I developed a reputation as a phony snob. Nevertheless, they couldn’t be prouder of me… and I could not be more ashamed of them.

I began a professional career, learned how to be an adult, and eventually found the love of my life. During this time, I had written off much of my family completely. I maintained a telephone relationship with both parents and two of my siblings. I went home on holidays, but even then my attendance was far from perfect. My relationship with my father had changed greatly since childhood. As an old man, he became regretful of his actions. He made it known that he respected my accomplishments, and often told me that he was incredibly proud of what I had done with my life. I, in turn, felt similarly about him. He had grown into a better man, and as I aged I also became more compassionate of what it must have been like for him to have life dreams that didn’t meet actualization.

In 2010, my father passed away. He died in a hospital room surrounded by mother, four of my five siblings, and myself. There are particular things that a man will remember throughout his life. One of mine will be the look of joy my father had when he realized that I had traveled 3,000 miles to be by his side. That look melted away any rage or hostility that I could ever have for a man that I vowed to hate for an eternity.

It took me over seven years before I came clean to my husband about my upbringing. When I finally told him the truth, he thought I was telling a very sick joke. It wasn’t until he realized that I was actually crying that he became compassionate. Although I felt his delay was hurtful, perhaps it was a true testament to how well I had learned to lie. His reaction was not one of pity or judgment, but sheer amazement that I survived such an ordeal with so few emotional problems. For me, the thing that kept me hanging on was a hope for a better future. I empowered myself to make that future happen.

When I was asked to write my coming-out story, I knew that my story wasn’t a single event. It was truly an evolution. Learning to be comfortable with who I truly am has been a process that stretched well beyond my sexuality. It’s been a difficult path. First, there was fear. This emotion was followed by grief, and then rage. I turned my rage into motivation, but not even my success could cure me. In the end, it was compassion, forgiveness, and honesty that set me free. I am proudly a gay man, but I am also proudly a survivor of child abuse. Best of all at 38 years old, I am finally happy to be myself.