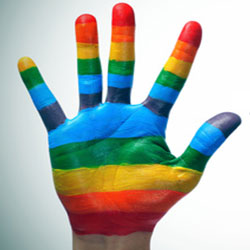 Coming out wasn’t really an issue when I was young. I knew the repercussions and everything would be two times more difficult as it is. When I was in primary school, most of my friends were girls, I was academically gifted, and such a klutz in sports. Naturally, all the guys teased me and called me names, which prompted me to take martial arts. I was never comfortable with being gay back then, because even my dad was controlling me and telling me not to have too many friends who are girls, or never watch “girly-shows”.

In high school, I transferred to a new school, so it was kind of a fresh slate. In this new environment, I never verbally said I was gay, but I was assuming that everyone knew, because I thought actions speak louder than words. Apparently, not. It wasn’t also the right time to come out to my parents because we had other trust issues with my family.

In college, I vowed to be clear about it from the get go and told my classmates whenever they asked or the topic of love comes into the conversation. I have been met with not-so-positive remarks here and there, but never really experienced extreme bullying. Probably because, I also made it clear that I won’t tolerate those kinds of actions and I can kick people’s butt if I have to. That sort of served as a deterrent to would-be bullies.

However, one of the more excruciatingly painful experiences I had was when I lost one friend because he kept on insisting that I attend Christian fellowships, that in summary, sort-of evangelizes you to pray the gay away. He said that there are a lot of ex gay Christians and they can help me realize that I can choose to be straight.

In contrast, the person who brought me closest to God that time, was another friend who’s part of the same group. He said, that he believes in a personal relationship with God through prayers and that he taught me that the way to get direction in life is to have this relationship with God. In the end, when he found out I was gay, he said, “I choose to accept you as a person, so while I don’t like what you do in the privacy of your own bed”

In terms of family, I told myself, that I’ll officially tell them when I’m already financially independent, so that whatever happens, I can support myself. So until now, I haven’t verbalized it to them, although I think they know. And frankly, nowadays, I don’t see the point of telling them, mostly because nobody comes out if they’re straight, so why do I have to tell them I’m gay. They’ll just know if/when they meet my boyfriend. Lastly, I think it would be hypocritical of them to hate me because they were the ones who helped my aunt accept her gay son.